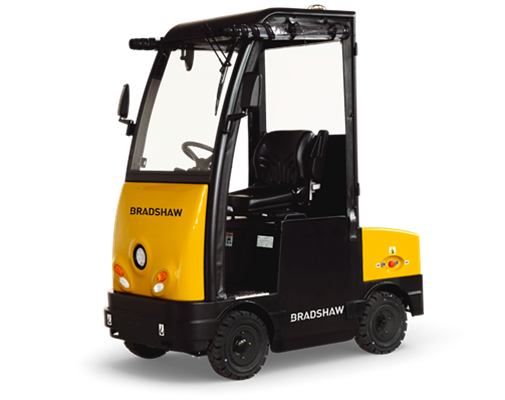 Autonomising electric vehicles such as these will both improve safety and drive huge operational efficiencies in terms of refining logistics of complex environments where the smooth running and timely delivery of goods and baggage are key to larger sectors such as flight schedules and haulage where efficiency savings are counted in seconds.

Fusion Processing’s CAVstar control and sensing system will be utilised to make Bradshaw’s third generation T700 and T800 Tow Tractors fully autonomous (unmanned). The state-of-the-art artificial intelligence system uses a range of sensors including LIDAR, optical cameras and ultrasonics to build up a picture of the environment around the vehicle and plots the most efficient safe route through it. This means the autonomous Tow Tractors can be operated safely inside factories where GPS signal is unavailable and without the need for extensive infrastructure to be installed. The compact CAVstar system can be retrofitted to any vehicle, where, it controls the throttle, braking and steering systems to provide full autonomous operation. The CAVstar system will be configured for the electric vehicle, and tuned to deliver more efficient throttle and braking control than is possible by a human driver, especially when pulling an eight tonne load.

Fusion Processing’s CEO, Jim Hutchinson said “We firmly believe that autonomous vehicles can transform the logistics of large warehouses and airports where tow tractors are used extensively to haul trailers and baggage carts. We can apply our AI and engineering expertise developed on numerous autonomous vehicle projects, including the world’s first full sized autonomous bus, to transform the warehouse logistics industry”.

Bradshaw Electric Vehicle’s joint Managing Director, Drew Bradshaw said “Our third generation T700 and T800 Tow Tractor is the ideal model to autonomise as production lines often run a 24 hour operation and the 48-volt system and rollout battery lends itself to extended run-time applications negating the need for shift changes and down time.  It will typically be hauling loads of up to 8-tonnes around complex environments where precision logistics are key to the smooth operations. We’re also particularly keen to realise the energy savings that Fusion’s autonomous CAVstar system can deliver”.